As part of my master’s degree program in Data Science and Analytics, I took a course in Data Mining, which is essentially building predictive models and systems based on historic data.   We looked at IMDB’s entire catalogue of films and all the user ratings of Movies and TV shows since the invention of film (earliest entry is dated 1894).  From this history we applied Data Mining techniques and Statistical Analysis to create a rating prediction system for potential new Films and TV Shows.

In this article, and one or two more to follow, I am going to share some of the more interesting top-level results.  Ultimately, our aim with this project was to answer the question, “How much can a certain actor, director, or writer add to (or take away from) the value of a potential TV Show or Movie?” 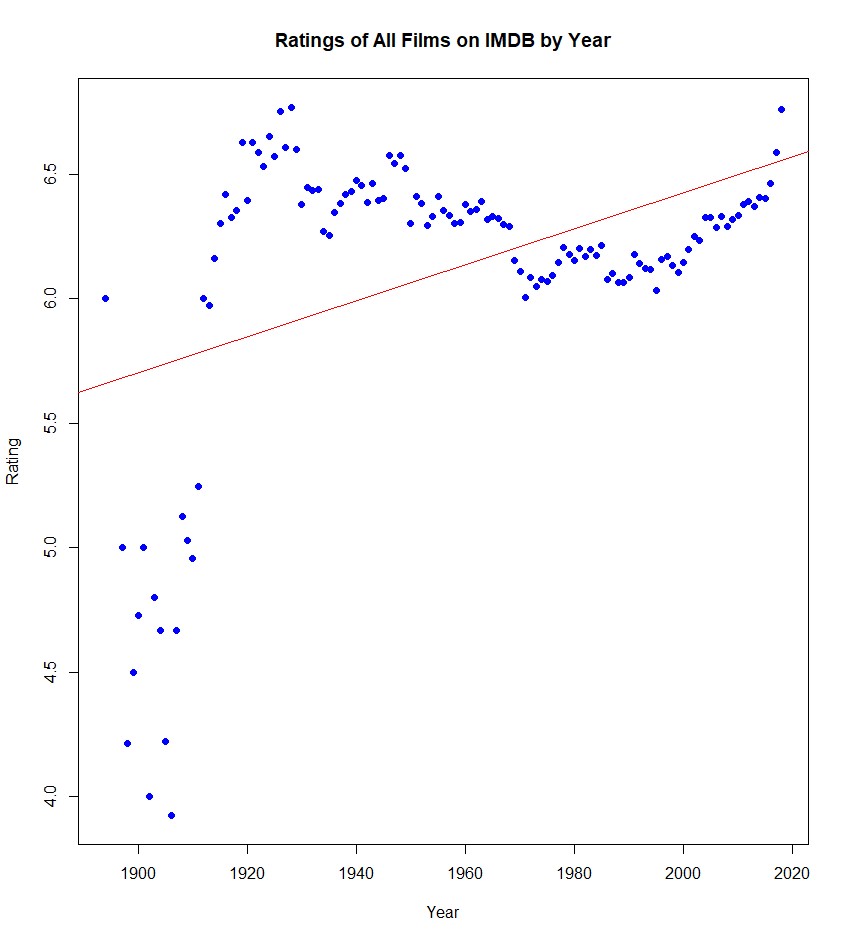 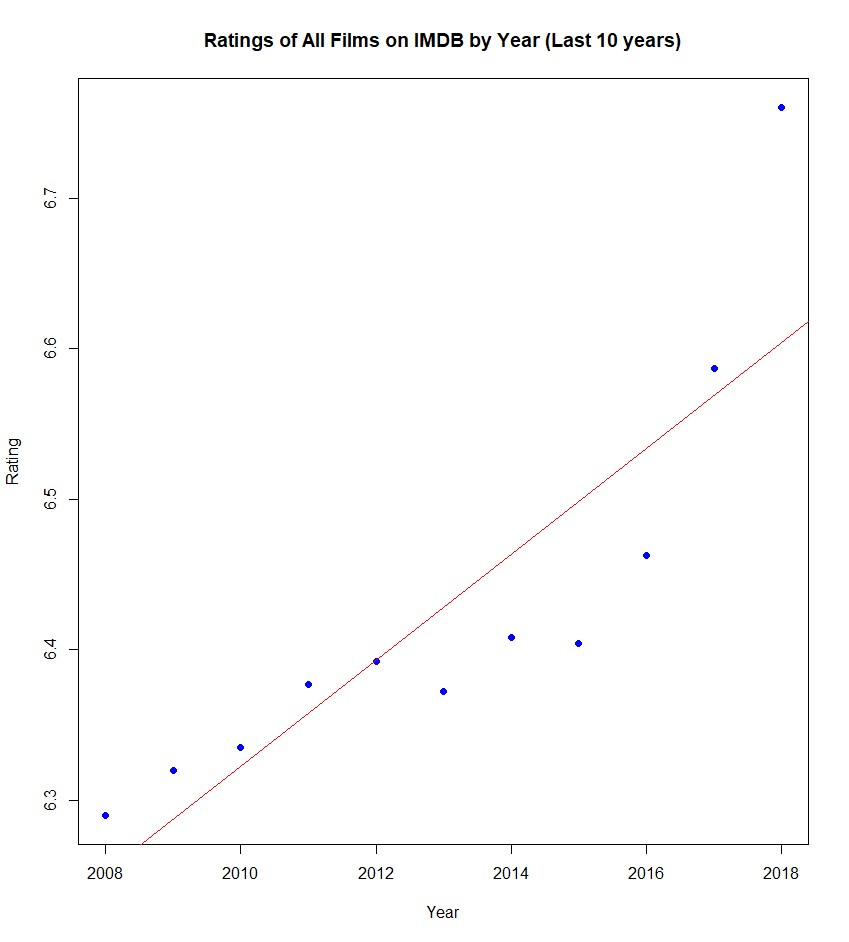 The average rating mean (which is an average taken by the sum of all ratings each year divided by the total count of rated films) has been rising steadily in the last ten years.  Ratings in 2007 averaged 6.3319, which was the highest since 1963, which had an average of 6.3912.

I should also note that the number of votes is declining slightly each year.  From what I have seen in the data, there are a lot more votes on higher rated titles.  Perhaps the reason for this is that people aren’t as compelled to vote on something unless they think it is good.  This would also explain the skew of higher votes in the whole dataset.

Even the best movies I have seen in the ratings table rarely, if ever, achieve a rating higher than 9, while there are many TV shows with a 10 (weighted average rating).  My explanation for this is that I think people are more engaged with TV shows online.

Game of Thrones is in the lead at #1, followed by Breaking Bad, and the HBO miniseries Band of Brothers.  You may also recognize #4, #5, and others as being episodes of Game of Thrones.  Only at the 100th entry do we finally see a movie.  Why is this?  Are movies on their way out?  I seriously doubt it.

My explanation for this is simple: I think people are more engaged with TV shows online these days and that is what’s being reflected in the ratings.  I’m a film maker myself, and I don’t recall rating many titles on IMDB or really any other website.  People often do, though. Sites like RottenTomatoes.com have become popular in recent years because people want to know what other people think before spending 90-120 minutes of their precious time on a movie.

I grew up in the 90’s when movie stars were “it”.  TV was frankly, kind of a joke, or more like a starting point compared to film.   Today, it almost seems like the opposite is true, at least when you compare big TV shows with small or medium sized films.  Ratings are higher with TV (at least on IMDB) and that makes sense when you think about it.  People are binge watching TV shows more at home and that’s what’s paying out.  The more hours you watch, the more Netflix, Hulu, Amazon Prime, Roku, and other streaming services make.

Out of the over 1,200 genre combinations used and rated in IMDB, I made a list of the top genres.  The list was compiled by analyzing all films having an average rating of 7 or higher and number of votes greater than 1000.  Documentaries and Biographies seem to be the most frequent in this list with some Adventure, Comedy, Animation, and Action mixed in.

None of the items on this list are from a single genre, they are all combinations of 2 and 3 genres.  All genres and sub-genres technically derive from the original genres, Comedy and Drama.  Personally, I think we’re at a point in entertainment where people want more than just a cliché Action or Drama or Comedy in a Film or TV Show.

Genre mashing is the act of taking combinations of genres and mashing them together to form something new and fresh.  An example of this would be Eternal Sunshine of the Spotless Mind.  You’ve got a sci-fi movie meets a love story.  Probably unheard of at the time but makes for an interesting combination.  Let’s face it, people want more than just a stale version of something they’ve already seen with new actors.

Everyone is Looking for the Next Blair Witch Project

Perhaps the best example I can think of with genre mashing is the Blair Witch Project (which happens to be the highest grossing film of all time).  Highest grossing meaning it made the most money compared to what it cost.  It was a pho documentary meets horror with a $60,000 budget and zero “star named” talent.  As of this article, it has made around $389 million (according to IMDBPro).

The way they marketed the Blair Witch Project was genius.  They presented it as a true story which left the audience guessing as to whether the events in it really happened or not.  This spawned the found footage style horror film.  Still, even with all this money, it only scored a 6.4 rating on IMDB.  There appears to be a disconnect between horror and higher ratings.

It should be noted, a higher rating doesn’t always mean more dollars made, but it often does.  As a film maker, I noticed and have been told that Horror is a “safe” genre to start with and a horror film, even without any names attached or big budgets, can make money.   This is kind of a catch 22 though because while horror films can make money, statistically, “your” horror film probably won’t.

If you look at the ones that do make money, they are franchise films, sequels, etc.  This doesn’t mean that you can’t make money with them, you just probably won’t.  Horror genres and sub-genres are rated very low overall on IMDB, but people are still watching them.  My personal theory on this is that people love to hate “bad” films.  I’m not saying all horror films are bad but there certainly are a lot of low budget B movies in that genre.

You might be saying to yourself, why is this guy talking about money when he said ratings.  It should be noted, whatever genre(s) you’re thinking of making, higher user ratings and word of mouth will push it farther than any type of ad campaigns you run for it.  Movies, and music for that matter, are still largely influenced by people talking about what they like to their friends, in real life and on social media.  The latter is easier to track and interpret. 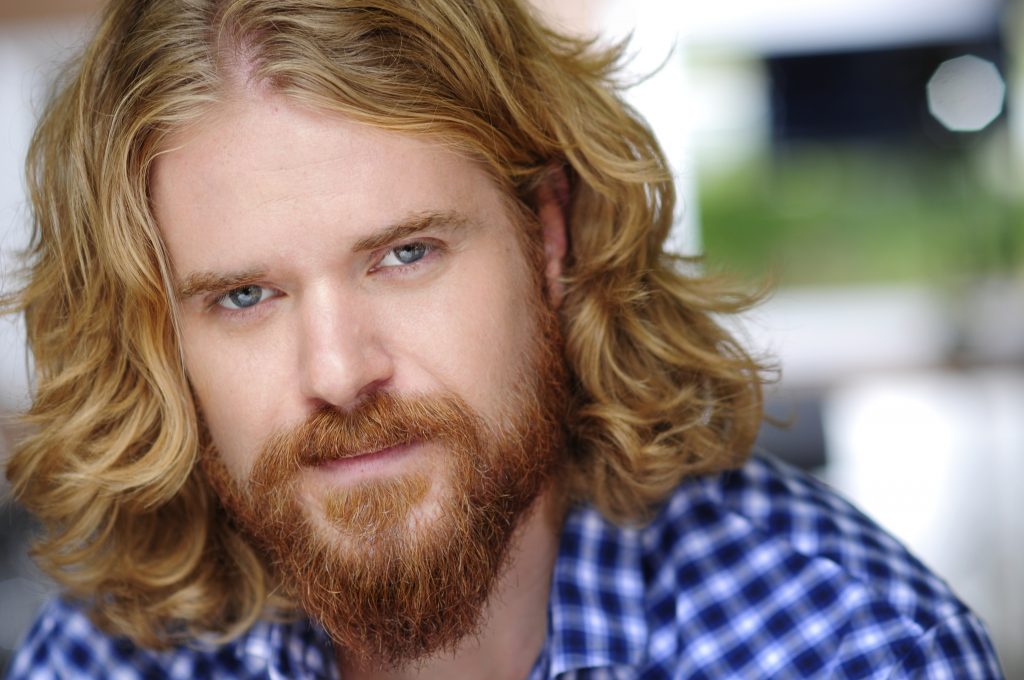 Nathan Kress, M.S. is an Award-Winning Scientist, Film Maker, and Musician.  Formerly a Software & Data Engineer, Analytics Developer & Analyst, he is CEO of What You See Productions, and Award-Winning production company.  He has worked for 2 S&P 500 Companies, 1 Fortune 100 company, 3 Billionaires, and won numerous awards in tech and innovation by Forbes Magazine, amongst others.

He holds a Master of Science degree (with Honors) in Data Science & Analytics from the Gallogly College of Engineering at The University of Oklahoma, a BBA degree in MIS (Business and Computer Science) from the University of Oklahoma, which was rated the #7 program in the U.S. at the time, and graduated from Recording Radio Film Connections (Los Angeles, California) with a 4.0 GPA in their Writer/Director/Producer program.